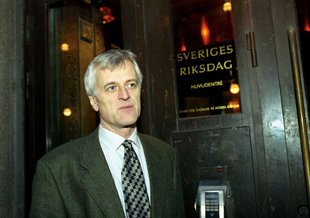 A revealing fictitious film about lobbying, power and the media. With this film Folke Rydén introduces himself as a fiction scriptwriter and director. However, he keeps the familiar documentary format when telling the story of a lobbyist (starring Anders Beckman) trying to influence the government’s decision on one particular issue. A decision which will affect the profits of the pharmaceutical industry as well as the life of a totally paralysed 14-year-old boy.

“Anders Beckman is genuinely natural as the main character, the Lobbyist”