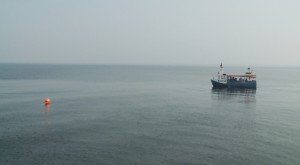 The Cod Game tells the story of human sacrifice versus the struggle to save the environment. In a unique portrait of a few fishermen in the Polish port of Darlowko, the film gives an inside view of the price paid to save the cod in the Baltic Sea. Over two turbulent years, The Cod Game follows the events that put the Polish cod fishing fleet on the brink of collapse.

Marcin Cholewinski is the youngest and most fearless fisherman in Darlowko. His biggest dream is to continue an old family fishing tradition. Shortly after buying his first boat – DAR 55 – the European Union decides to punish Polish fisherman for many years of overfishing. A cod fishing ban is imposed. But Marcin ignores the restrictions. Instead, he catches as much cod as he can. His confident attitude is encouraged by the local fisherman’s union, and Marcin takes the lead in the union’s struggle to preserve the small fisherman’s right to fish.

The Cod Game follows Marcin and his colleagues in their struggle to survive. It depicts  how controversial political decisions affect normal people and push them to break the law.

2012 Awarded “The Prize of the Festival”. On march 25 in Lorient France, at “Pêcheurs du Monde” film festival

2012 Nominated to the “Colorado Environment Film Festival” in Colorado, USA

2012 Nominated to the “Green-screen Festival” in Eckenförde, Germany